Review of "Undead and Unworthy" (Undead aka Queen Betsy, #7) by MaryJanice Davidson 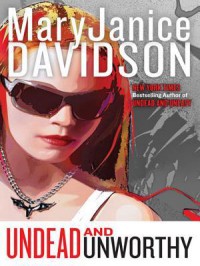 This reader's personal opinion, ©2018, all rights reserved, not to be quoted, clipped or used in any way by goodreads, Google Play, amazon.com or other commercial booksellers*

I would have DNF'ed if the death scene(s) had been in beginning chapters; Betsy not worth the sacrifice.  I did read mentally preparing myself to just treat fashion designer brand dropping as a running gag.  I very quickly remembered the characters.  Even quicker what amused or annoyed me about this series.

I do do wish the ghost of the dead stepmother who is haunting her hadn't spent a whole book hinting at crap we still don't know.  Not main storyline so not exactly a cliffhanger, but got annoying.

I'll toss in some quotes to give you an idea of some Pros and Cons.

“When I want your opinion, Barbie, I’ll pull the string on your back.”

Then my dead stepmother said, “This is all your fault, Betsy, and I’m not going anywhere until you fix it.” [well, initially funny except "it" never explained]

I was beginning to see where this was going. Oh, it’d be a lovely children’s book: Garrett the Fiend Finds Friends!

Yeah, it’s cool, but then you’ve got dead vampire in your hair for hours.

“They’re awake,” he gasped. “And they want to kill you.” “Who?” Sinclair, Jessica, Marc, and I asked in unison. It could be anyone. The guys who delivered pizza from Green Mill. Other vampires. The Ant’s book club. Werewolves. Zombies. And, of course, the uninvited guest who’d jumped out the window. So many enemies, so little—

He yanked, and my (cashmere! argh) sweater tore down the middle. He shoved, and my skirt (Ann Taylor) went up. He pulled, and my panties (Target) went who knew where.

“Whaaaat?” I whined, moodily pulling off my Herrera boots.

And yes, I was still wearing my Marc Jacobs heels, which helped.

Eventually I will read more in series now it's available in library ebooks.

*©2018.  All rights reserved except permission is granted to author or publisher (except Penumbra Publishing) to reprint/quote in whole or in part. I may also have cross-posted on Libib, LibraryThing, and other sites including retailers like kobo and Barnes and Noble. Posting on any site does not grant that site permission to share with any third parties or indicate release of copyright.

★★★★★ = All Time Favorite
★★★★½ = Extraordinary Book. Really Loved It.
★★★★☆ = Loved It.
★★★½☆ = Really Liked.
★★★☆☆ = Liked.
★★½☆☆ = Liked parts; parts only okay. Would read more by author.
★★☆☆☆ = Average.   Okay.
★½☆☆☆ = Disliked or meh? but kept reading in hopes would improve.
★☆☆☆☆ = Loathed It. Possibly DNF and a torturous read.
½☆☆☆☆ = So vile was a DNF or should have been. Cannot imagine anyone liking.  (Might also be just an "uploaded" word spew or collection that should not be dignified by calling itself a "published book." If author is going batshit crazy in the blogosphere over reviews -- I now know why they are getting bad reviews.  Or maybe author should take remedial classes for language written in until basic concepts like using sentences sink in. Is author even old enough to sign a publishing contract or do they need a legal guardian to sign for them?)