Review of "The Devil's in the Details" by Kimberly Raye 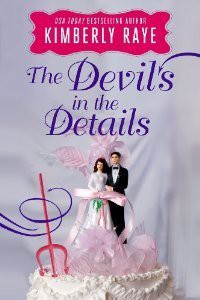 This reader's personal opinion, ©2014, all rights reserved, not to be quoted, clipped or used in any way by Google Play, amazon.com or other commercial booksellers*

All the ingredients were there, good writing, premise really potentially a big win for me (reeked of probably warped humor)—but, somehow there was a disconnect.

I just never got into the main character or the storyline.  Never cared much what did happen to her or how storyline unfolded.

I think maybe I needed more paranormal elements and either a lot more or a lot less romance.  The humor tried very hard and was hit or miss with me.

Take out the paranormal aspect and it really could have been any old contemporary with youngish unmarried woman struggling to get out from underneath an overwhelming family,—a particularly self-involved woman although I give her credit for living independently and taking care of her own problems versus waiting for the rescue, family money, etc.

It moved quickly, and seriously the ingredients should have come together so that I enjoyed.  It is the first in a series (the next one is The Devil Made Me Do It) so maybe it just suffers first-book-itis by being the series setup.

"Youngish" sits oddly in a character supposedly over a thousand years old.  As does a later scene where turning on the waterworks causes gramps -- the fallen angel starting the whole Hell hierarchy with demons and being head of all evil -- to fold.

That Lucifer had all female descendants because God gave life and thought it was funny was a twist that could have been interesting.  But they were all bitchy, whiney, looking for a man and to be the one to have a boy child females.  Initially, Lucifer had said would retire leaving control of hell to the daughter who married a chief demon (hence our M.C.s mother's rush to the alter).  So, despite Lilith, Beezlebub, etc. being females jointly in charge of hell while gramps off golfing -- don't look for any female empowerment here.

Our heroine, Jess ("Jezebel"), supposedly wants out of the family business of evil.  Doesn't stop her from using one cousin to give problem wedding guests jock itch, doesn't stop her from making BFF date an unwanted demon to pump for info, doesn't stop her from trading the demonslayer (out to kill her that she of course lusts after ) another demon's life lured into her trap for her own life -- I think that's a big part of why I did not connect to the character.  Beyond how a thousand year old being sounded under 25.

A few plot points did not track -- demons having super fast metabolism needing lots of sugar (chick fights at demon baby shower when brownies run out) but not gaining weight runs through most chapters.  Then in another she feels guilty about snarling down a bag of Chips Ahoy and promises self more treadmill and another spot promises to do more cardio ... all this evil family stuff but she gives thanks and pleas almost casually to the guy upstairs.

I just didn't get it, had trouble suspending disbelief to go along with the "worldbuilding," didn't buy into or connect with the heroine, the demonslayer love interest didn't even seem lustworthy to me and had no idea why she fell in love with and agonized over.

But, possibly another reader will connect with this book, get all the humor, get into the character.  The series could even be way better than the opening book.  This is an author whose books I usually really like; but, admittedly, I usually wind up liking her books because of a character I really get into—which this book sorely lacked.

Reading progress, finished:  Will write a fuller review tomorrow.  I still did not really connect to story or characters; but, there was plenty to like so another reader might.  Which makes it one of those reviews I have to think hard about in order to give a clearer picture.

Reading progress 72%:  Hmm...coming up on demon bachelorette party.  With male strippers, including the Candy Man in peppermint striped speedo.  Has potential.

"No slicing and dicing the dancers."

Reading progress at 41%:  It's a fast read so I'll finish up tonight.  I'm a sucker for wedding chaos funnies; but, I'm still not connecting to this one.  A familiar author so it's not an issue with the writing style and based on her past books I already knew I would not DNF this one.

Just not getting into any of the characters or the storyline yet.  Right now, Jezebel (the MC) self-involved enough to have BFF date unwanted suitor to pump for info and *ick* is getting the hots for the guy out to kill her.

It's not encouraging when even a scene with cute puppies doesn't engage my "feels" for the character.

Reading progress at 17%:  I wanted something lighter to read (and felt guilty not noticing this pre-order had downloaded) in between some "heftier" works.  So far this one is either going to be outright hilarious or just banal end of the chicklit spectrum.

Not the biblical sense of "devil" exactly; it's hell's hierarchy with lots of demons and supernaturals.  Heroine is the succubus daughter of Satan (her mom, Lilith, with grandpa the fallen angel but mom finding it trickier to let mortals think she's a guy) who wants to turn her back on her evil ways/powers.

Has some funny lines about demons specializing in things like "sex, war, IRS audits..." and some red flags for me that it might be vapid chick lit with heroine lusting over "...the new Marc Jacobs hobo."

She has to plan Mom's wedding and there's potentially lots of humor with a huge cast of demon cousins and relatives.  Not really connecting with the story or the characters yet; maybe too typical "the clan's all here" stuff leading up to a wedding.  We'll see.

*©2014. All rights reserved except permission is granted to author or publisher to reprint/quote in whole or in part. Copyrightholder posted on booklikes, BookRabbit, Leafmarks, The Reading Room and may have cross-posted to other book sites. Posting on any site does not grant that site permission to share with any third parties.

★★★★★ = All Time Favorite
★★★★½ = Extraordinary Book. Really Loved It.
★★★★☆ = Loved It.
★★★½☆ = Really Liked.
★★★☆☆ = Liked.
★★½☆☆ = Liked parts; parts only okay. Would read more by author.
★★☆☆☆ = Meh. Okay.
★½☆☆☆ = Disliked but kept me reading in hopes would get better.
★☆☆☆☆ = Loathed It. Possibly DNF and a torturous read.
½☆☆☆☆ = So vile was a DNF or should have been. Cannot imagine anyone liking.  (Might also be just an "uploaded" word spew or collection that should not be dignified by calling itself a "published book." Or author should take remedial classes for language written in until basic concepts like using sentences sink in. Is author even old enough to sign a publishing contract or do they need a legal guardian to sign for them?)