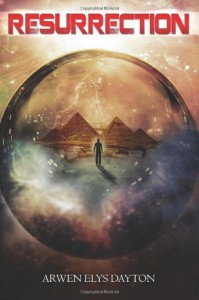 This is a perfectly good book I suppose.  But, I am having trouble getting into.  Likely just me for reasons I'll try to articulate.   So please don't let that deter anyone else from trying.  Particularly since available for free if you participate in amazon Prime lending library.

I'm not even sure it's a DNF as I may buy and come back to chapter by chapter because curious about some plot points raised.

It does have accolades from some seriously "big" SF authors (although the original 2001 paperback edition was from publisher ROC so accolades may have come at publisher request):

with crisp, cinematic writing - an

imaginative blending of past, present, and future."

-Jerry Pournelle, bestselling author of The Mote in God's Eye

My take on the book and why putting aside at just over 30%:

I've read a half dozen time shifts and character POVs already; my personal tastes don't lean to so much jumping around.  Started with a couple on a suspended animation ship en route, flashback to before they boarded ship, flashback to enemy crew preboarding their ship, flash to enemy crew on ship, flash back 3000 years ... you get the idea (gives new meaning to Anderson's quote).  I don't always ditch a book for quickie worldbuilding or the beginning setup, but each flashback or time shift started that again.

Overall, I felt as if I wandered into SF section of a bookstore, picked this up, and a fan approached me to enthusiastically outline the plot points for me—as if that outline was what I was reading versus being immersed in a story. Not getting enough of any one POV to develop or care about any of the characters.  No real clue about the story.  Possibly book settles later instead of jumping around or reading like outline or short stories.  I am curious as to which of the enemy races has been brainwashed/propaganda'ed versus what the truth is--the only reason I may return to and skim through piecemeal.

Somewhat simple writing but nothing really wrong with it; really hard to put my finger on "why" not finishing this book.  Actually the writing has been a relief after attempting some indie books with some really torturous sentence structure (or lack of).

One reason I think others might like is that this author's second published novel hit #1 on kindle in science fiction category in U.S. and U.K. -- in the exact same publication year as the final Wheel of Time book, newish Game of Thrones, final Sookie Stackhouse book (amazon lumps urban fantasy into SF so there were also A Perfect Blood and numerous entries in some über popular UF series), books by Hugo award-winning authors like John Scalzi and Jim C. Hines -- not number. one in freebies or prime lending library or by non-traditional publisher -- number one in SF!  And that's so impressive it must just be me.

I am glad a new friend on booklikes brought it to my attention because I somehow missed it when stalking the top SF every month.  Outselling the Hugo awardwinners and the UF books with automatic pre-orders and fanpoodles is an accomplishment in and of itself.

Screenshot of author's amazon page with the #1 claim:

So far, I'm liking well enough.  A bit "tell" and rather quickly setting up the worlds and the players In an uncomplicated writing style.  Definitely science fiction with two warring races having suspended animation ships headed towards Earth where rumored past alien excursion to Earth left secrets to faster than light travel.  So far plausible; characters on both sides have existing versus building relationships — one ship has two guys from different species raised as brothers and the other ship has a couple in a romantic/sexual relationship.

Well, just finally downloaded October Kindle Prime Lending Library read.  (Almost forgot to take advantage of the October freebie; asked booklikers for some prime recommendations and this one looked "different").  May or may not have time travel (time travel hit or miss with me anyway) but does have a future member of the spacefaring alien race that in Earth's past had something to do with the Egypt of the Pharoahs returning to Earth.  All indications are that it will either be a fascinating read or very quickly a DNF (author's name definitely seems a pseudonym but I do not know that for sure; if pseudonym, reeks of rainbows and sparkly ponies).